Back to page
Edit

Poseidon was the Greek deity of earthquakes, the seas and oceans, horses, and storms. He held sway over the seas and waters, and is particularly known for causing tempests and when he was happy he made clear skies for travelers or for his own gain. One of his cult titles, Enosichthon, means "earth shaker", referring to his role in causing earthquakes. His symbols are the trident, with which he raises the waves and causes tides, and the bull, which is as aggressive as him. He is also called the "tamer of horses", as he created the first horse from the crests of the waves. His Roman counterpart is Neptune.

Poseidon was the child of Kronos and Rhea, and brother to Zeus and Hades. According to some folklore, he was saved by his mother Rhea, who concealed him among a flock of lambs and pretended to have given birth to a colt, which was devoured by Kronos.

The earliest attested occurrence of the name, written in Linear B, is Po-se-da-o or Po-se-da-wo-ne, which correspond to Poseidaōn and Poseidawonos in Mycenean Greek; in Homeric Greek it appears as Ποσειδάων (Poseidaōn); in Aeolic as Ποτειδάων (Poteidaōn); and in Doric as Ποτειδάν (Poteidan), Ποτειδάων (Poteidaōn), and Ποτειδᾶς (Poteidas). A common epithet of Poseidon is Γαιήοχος Gaiēochos, "Earth-shaker," an epithet which is also identified in Linear B tablets.

The origins of the name "Poseidon" are unclear. One theory breaks it down into an element meaning "husband" or "lord" (Greek πόσις (posis), from PIE *pótis) and another element meaning "earth" (δᾶ (da), Doric for γῆ (gē)), producing something like lord or spouse of Da, i.e. of the earth; this would link him with Demeter, "Earth-mother." Walter Burkert finds that "the second element da- remains hopelessly ambiguous" and finds a "husband of Earth" reading "quite impossible to prove."

Another theory interprets the second element as related to the word *δᾶϝον dâwon, "water"; this would make *Posei-dawōn into the master of waters. There is also the possibility that the word has Pre-Greek origin. Plato in his dialogue Cratylus gives two alternative etymologies: either the sea restrained Poseidon when walking as a foot-bond (ποσί-δεσμον), or he knew many things (πολλά εἰδότος or πολλά εἰδῶν).

Poseidon was the son of Kronos and Rhea. According to most versions, his father swallowed him at birth, and then he was rescued by Zeus along with the other elder Olympians. However in some versions of the story, he, like his brother Zeus, did not share the fate of his other brother and sisters who were eaten by Kronos. He was saved by his mother Rhea, who concealed him among a flock of lambs and pretended to have given birth to a colt, which she gave to Kronos to devour.

According to a single reference in the Iliad, when the world was divided by lot in three, Zeus received the sky, Hades the underworld and Poseidon the sea. In the Odyssey (v.398), Poseidon has a home in Aegae.

The patronship of Athens

Athena and Poseidon once competed to be the patron of the city of Athens. The people of Athens, (then called Attica) not wanting to offend either, could not choose. Then, they resorted to gifts. Poseidon gave Athens access to water, which, alas, was salty. Athena made the olive tree. Her gift was better, so Poseidon lost the contest.

The walls of Troy

Poseidon and Apollo, having offended Zeus by their rebellion in Hera's scheme, were temporarily stripped of their divine authority and sent to serve King Laomedon of Troy. He had them build huge walls around the city and promised to reward them well, a promise he then refused to fulfill. In vengeance, before the Trojan War, Poseidon sent a sea monster to attack Troy. The monster was later killed by Heracles.

Poseidon appears mostly as a mature man of sturdy build with black stubble, holding his trident. In Greek art, he is shown on a chariot drawn by a hippocampi, about to throw his trident. 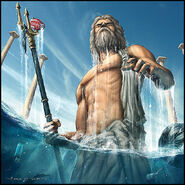 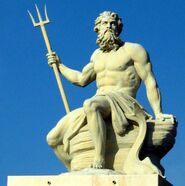