His symbols are the thunderbolt, eagle, bull, and oak. In addition to his Indo-European inheritance, the classical "cloud-gatherer" also derives certain iconographic traits from the cultures of the Ancient Near East, such as the scepter.He also argues with Poseidon talking about who Rhea liked best.

Kronos sired several children by Rhea - Hestia, Demeter, Poseidon, Hera and Hades, but swallowed them all as soon as they were born, since he had learned from Gaia and Ouranos that he was destined to be overcome by his own son as he had overthrown his own father—an oracle that Rhea was to hear and avert.

When Zeus was about to be born, Rhea sought Gaia to devise a plan to save him, so that Kronos would get his retribution for his acts against Ouranos and his own children. Rhea gave birth to Zeus in Crete, handing Kronos a rock wrapped in swaddling clothes, which he promptly swallowed.

Rhea hid Zeus in a cave on Mount Ida in Crete. Then, according to different versions of the story:

The king of the Olympians[]

After reaching manhood, he learnt of his father through Gaia, who told him to seek the Titaness Metis' advice to save his brethren. Metis prepared an emetic, and gave it to Zeus to be mixed into Kronos' drink. With Gaia's help, he attained the position of cupbearer in Kronos' palace, and mixed the emtic into his wine. Kronos choked, and disgorged first the stone, then Zeus' sblings in reverse order of swallowing.

Zeus released Kronos' brethren, the Cyclopes and the Hekatonkheires from their dungeon in Tartarus, killing their gaurd Kampê in the process. As a token of their appreciation, the Cyclopes gave him thunder and the thunderbolt, or lightning, which had previously been hidden by Gaia. Together, Zeus and his brothers and sisters, the Cyclopes and the Hekatonkheires overthrew the Titans, in the combat called the Titanomachy. The defeated Titans were then cast into a shadowy underworld region known as Tartarus. Atlas, one of the titans that fought against Zeus, was punished by having to hold up the sky after discussing with Hades and Poseidon.

After the battle with the Titans, Zeus shared the world with his elder brothers, Poseidon and Hades, by drawing lots: Zeus got the sky and air, Poseidon the waters, and Hades the world of the dead (the underworld). The ancient Earth, Gaia, could not be claimed; she was left to all three, each according to their capabilities, which explains why Poseidon was the "earth-shaker" (the god of earthquakes) and Hades claimed the humans that died.

Gaia resented the way Zeus had treated the Titans, because they were her children. Soon after taking the throne as king of the gods, Zeus had to fight some of Gaia's other children, the monsters Typhon and Echidna. He vanquished Typhon and trapped him under Mount Etna, but left Echidna and her children alive as a test for mortal heroes.

After the wars, Zeus married the Titaness of prudence, Metis, the daughter of Oceanus and Tethys. Metis was exceptionally wise, and had helped Zeus come up with many strategies and plans in the war to help Zeus. One day, however, after geting a prophecy from the Oracle of Delphi that his child by Metis would be more powerful than him, Zeus decided to kill Metis. Using the fact that Metis could shape-shift, Zeus asked her to turn into a fly, and then swallowed her.

The birth of Athena[]

A few months later Zeus felt a continuous headache. Even after repeated medicine, when it did not cure, Prometheus the Titan of forethought asked Hephaestus to open Zeus head with an axe. As soon as it was opened, Metis' daughter, Athena, sprung from the head.

Zeus was brother and consort of Hera. By Hera, Zeus sired Ares, Hebe and Hephaestus, though some accounts say that Hera produced these offspring alone. Some also include Eileithyia and Eris as their daughters. The conquests of Zeus among nymphs and the mythic mortal progenitors of Hellenic dynasties are famous. Olympian mythography even credits him with unions with Leto, Demeter, Dione and Maia. Among mortals were Semele, Io, Europa and Leda and with the young Ganymede.

Initially, Hera was resistant of Zeus, but Zeus turned into a cuckoo, flew to her window, pretending to be in distress. Hera took the cuckoo into her arms and cuddled the bird. Zeus turned back into himself and Hera found herself cuddling with Zeus. Hera then agreed to become his wife and the two married.

Many myths render Hera as jealous of his amorous conquests and a consistent enemy of Zeus' mistresses and their children by him. For a time, a nymph named Echo had the job of distracting Hera from his affairs by talking incessantly, and when Hera discovered the deception, she cursed Echo to repeat the words of others.

Zeus played a dominant role, presiding over the Greek Olympian pantheon. He fathered many of the heroes and was featured in many of their local cults. Though the Homeric "cloud collector" was the god of the sky and thunder like his Near-Eastern counterparts, he was also the supreme cultural artifact; in some senses, he was the embodiment of Greek religious beliefs and the archetypal Greek deity.

Aside from local epithets that simply designated the deity to doing something random at some particular place, the epithets or titles applied to Zeus emphasized different aspects of his wide-ranging authority:

Additional names and epithets for Zeus are also:

Depictions of Zeus as a bull, the form he took when raping Europa, are found on the Greek 2-euro coin and on the United Kingdom identity card for visa holders. Mary Beard, Professor of Classics at Cambridge University, has criticised this for its apparent celebration of rape. Zeus has been portrayed by various actors:

Zeus is usually shown as a muscular man crowned with a laurel wreath, usually with an eagle in the background. Zeus is frequently depicted by Greek artists in one of two poses: standing, striding forward, with a thunderbolt leveled in his raised right hand, or seated in majesty.

A statue of Zeus. 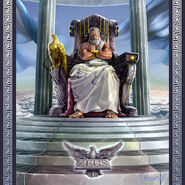 Zeus seated in majesty -- a common theme in Greek art.

The Chariot of Zeus, from an 1879 Stories from the Greek Tragedians by Alfred Church. 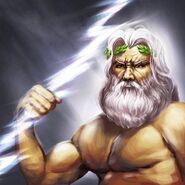